The Houthi militia has vowed to prevent a Yemeni artist from entering Sanaa, following her recent visit to the Egyptian capital, Cairo.

A Houthi leader demanded that his group prevent the artist, Fatima Muthana, from returning to Sanaa, after she went to perform a party in Cairo, on the pretext that she had corrupted the daughters of Yemen, as he put it.

A Houthi leader named Hussein Al-Amlahi said: “As soon as the person requested by an organization arrives to participate in an event in Egypt, he returns to insult and ridicule the Yemeni people, as the singer Fatima did from Sanaa. She went to Cairo to hear her voice, so her first publication was why. The Yemeni people do not allow women to wear shredded clothes like Egypt!!”

He accused the Houthi leader of implementing the agenda of the organizations in Yemen, in a lengthy series of tweets, which he concluded by saying: “They played with people, the daughters of the organizations, and it would be better if you were prevented from returning to Sana’a if you wanted to preserve your daughters because the thought of civil society organizations of the open nations had taken control of them and they would spoil more than they would have been. pay off”.

This comes days after the Houthi militia sentenced the artist and model, Intisar Al Hammadi, to 5 years in prison, after she was kidnapped from a street in the capital, Sanaa, and immoral charges were brought against her. 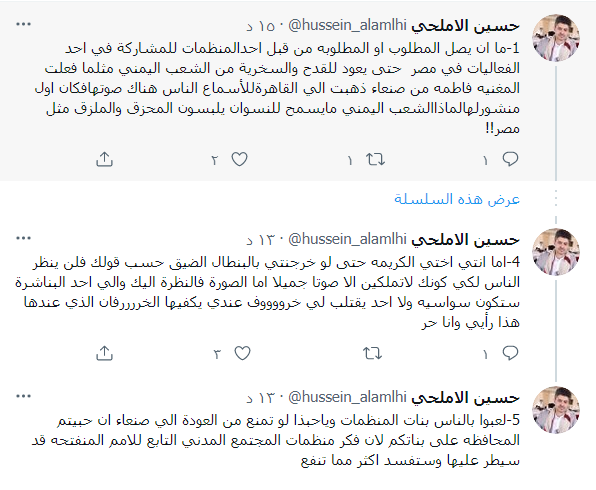