Today, Tuesday, the United States of America revealed, in an announcement, a reward of 5 million dollars for anyone who provides information on the perpetrators of the attack on the destroyer USS Cole in Yemen.

The US State Department’s Rewards for Justice Program explained, through its Twitter account, that al-Qaeda attacked with booby-trapped boats the destroyer USS Cole in the port of Aden, Yemen, in 2000, killing 17 and wounding more than 30 members of the American forces. .

“If you have information on any of the individuals involved in this terrorist attack, you may receive a reward of up to $5 million,” he said. 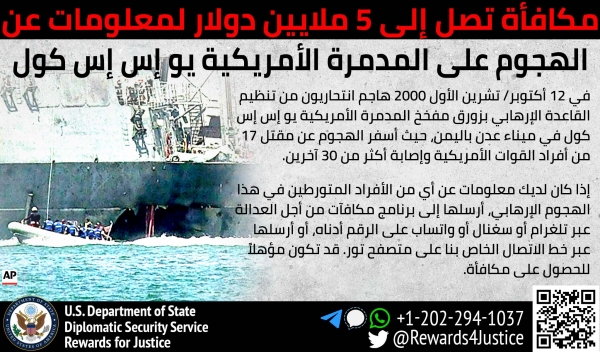 The arrival of a sophisticated air force to the grip of the Houthis.. How did it reach the militias??