A conference leader affiliated with the Houthi militia accused a legitimate official of providing the Arab coalition with coordinates for the destruction of a number of areas.

Hussein Hazeb, impersonating the Minister of Higher Education in the unrecognized militia government, said that the governor of Al-Mahwit Governorate, Saleh Sami, was the one who provided the coalition with the waypoint of the historic Kawkaban fortress to be destroyed by aviation, and to kill its people and a quarter of it, as he put it.

The Houthi minister also accused Governor Sami of being the one who gave the coalition the coordinate of a divided bridge in the Al-Ahjar area, to be destroyed by air strikes.

Hazeb’s accusations follow similar accusations from the governor of Mahwit, who said in a tweet to him on Twitter that the bombing of the house of Sheikh Abdul Latif al-Qibli in the Juba district, by the Houthi militias, would not have happened before consulting “Abu Raghaal” Hussein Hazeb.. as described.

And before he was banned by the Houthi minister, Hazeb, Sami sent a message to him, saying: You have lost the world, religion, tribe, tribe, and virility.

Last Thursday, the Houthi militia bombed the house of Sheikh Abdul Latif al-Qibli Nimran, in the Juba district, with a ballistic missile, which resulted in its complete destruction and the death of 12 people, including 2 of his children. 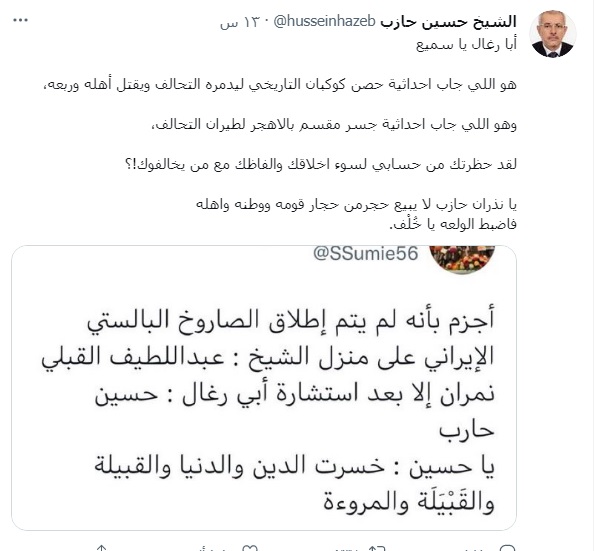