The Houthi militia issued a decision to change the version of the call to prayer in Amran Governorate, north of the capital, Sanaa.

Local sources said that the Houthi militia instructed all mosque muezzins to change the version of the call to prayer for the five daily prayers, and to adopt the Shiite version compulsory, after it had been optional for years.

An official document, a copy of which was obtained by the Yemeni scene, issued by the endowment office in the governorate, included instructions to change the well-known wording of the call to prayer, to delete two takbeers from its beginning, and to add the phrase “Hayya ala Khair al-Amal” before the last takbeer.

Since its takeover of the province, the Houthi militia has changed all mosque preachers and imams, prosecuted and imprisoned them, and imposed affiliated elements in cities and villages, in an attempt to obliterate all beliefs that contradict it.

The militias had issued a similar circular in Sana’a, forcing all mosque muezzins to change the well-known version of the call to prayer, threatening them with punishment and expelling them from their homes if they refused, as well as taking them into sectarian courses. 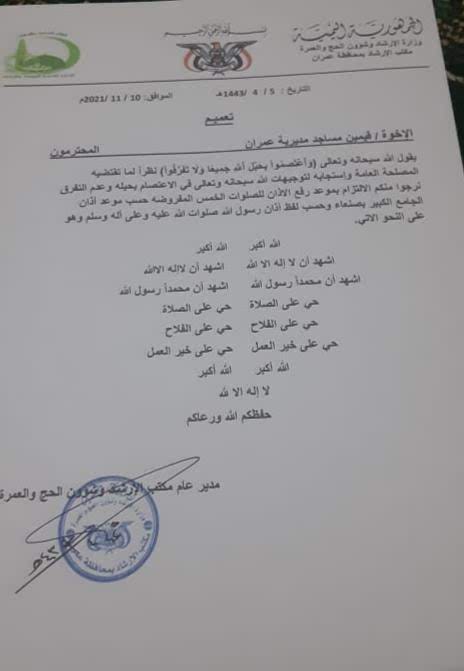 A Houthi field leader was killed in Al-Kasara, along with a number of his companions, and the families of others, some of them from Saada

An expensive secret trial in the case of the assassination of a “president of the republic”!